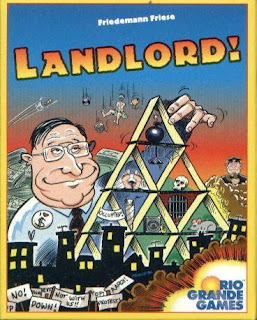 is a card game designed by Friedmann Friese for 2-6 players. It was published in 1992 and distributed here in the US by Rio Grande Games. For my friends who are new to hobby gaming, this is a game you would most likely have to order online if you don't have a specialty gaming shop in your area. I bought mine from Amazon for $12. Board Game Geek has a more in-depth explanation of the gameplay; below you will find my impression of the game.

As the name suggests, the basic idea of this game is being a land owner. Each person builds apartments and tries to fill them with wealthy tenants, while putting the deadbeats in their neighbors' apartments. You can also blow up other landlords' buildings, but don't get caught without an alibi! 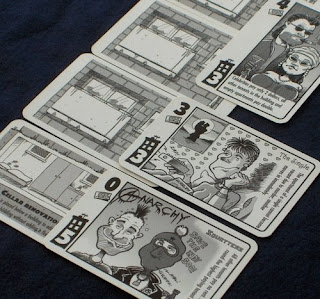 There are two unusual game mechanics in this game. One is that each card does double-duty. You can turn the card on one side to use it as one of the apartments in your building, but that means you can't take advantage of whatever is on the other side. It could be a tenant, an alibi, or a chance to cheat another player out of his rent. So with every turn, you have to decide how each card would benefit you most. The other twist is that you have to pay money to draw cards. This causes more decision-making because you win by having the most money at the end of the game. You don't want to buy more cards than necessary and deplete your bankroll.

The card art is in a slightly grungy, black-and-white cartoon style. It is my understanding that earlier versions were a bit vulgar, and you may read that in reviews. However, the Rio Grande set that I got is perfectly child-safe -- other than the fact that you can blow up a building or murder a tenant, of course. At least the alibi cards don't picture an orgy like the ones in the German set! The cards themselves are not flimsy, which is a good thing because my kids also like playing this game. As for other components, I would recommend the use of poker chips or paper money. My copy of Landlord didn't come with anything to use for money, and I don't like keeping score on paper. I have two incomplete copies of Monopoly, so I borrowed the money from that. If you want something that matches the art style of the game, you can download this file and print your own money.

Landlord! is less complicated than Bang!, but it is still more complicated than any other game I've attempted with my adult gaming partners. The information on all the cards is in English (at least in the Rio Grande version) and there are no strange symbols to interpret. I think the theme elements of building apartments and collecting rent are more intuitive than pretending to be cowboys, so the game flowed more easily even when we flubbed the rules.

ABM, my husband, likes Monopoly and I wanted to find a game with a similar theme that could be played in less time. Also, I wanted something that had a board game feel but with a card game price :-). I think this fit the bill. It takes us about 35 minutes to play, but that might decrease once everyone is a bit more familiar with the rules.
Posted by Dani In NC at 9:31 AM

I have heard lots of good things about Landlord! but have yet to try it myself.

Another great game on real estate is For Sale - in this one you're the real estate agent selling houses. Simpler I would say than Landlord.

The other one, that's more complicated but a definite hit with all those I've played with is 'Citadels'.